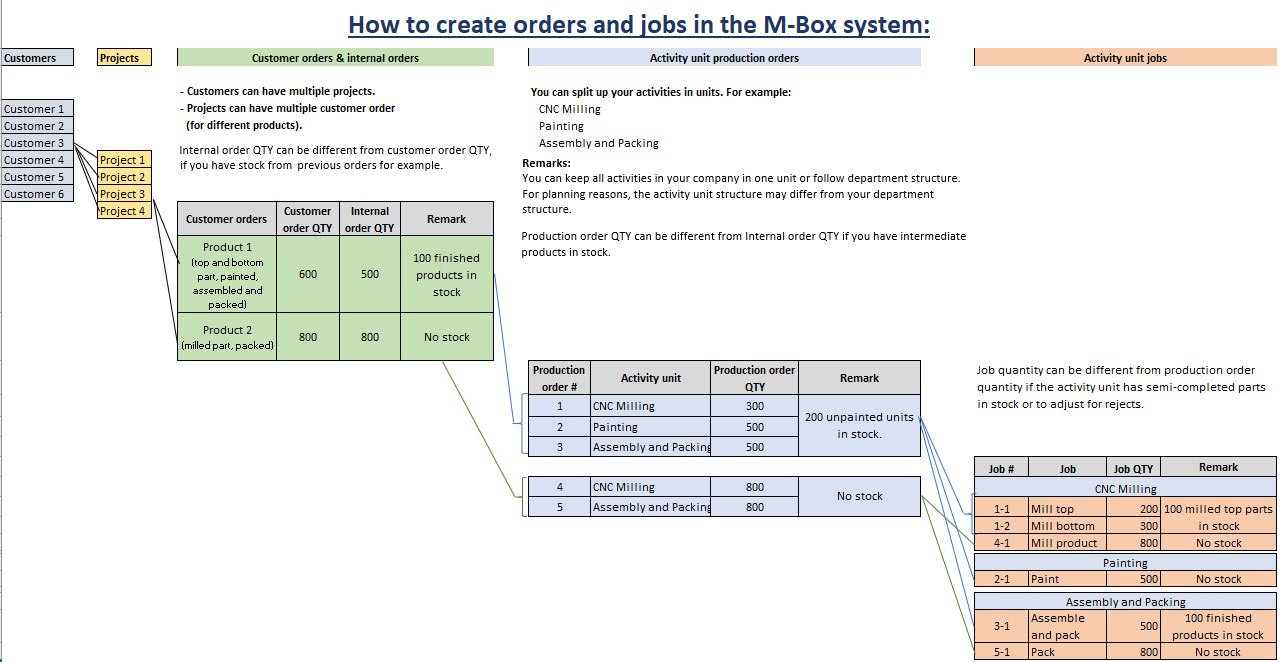 Use Our On-Site Tutorials

What is "Customer Order"?

Customer Order – is a quantity of a product ordered by a customer.

A project can have several Customer Orders (different products).
A customer can have multiple projects.

What is "Internal Order"?

Internal Order – is a quantity of a product that has to be produced to complete Customer Order.

Internal Order quantity (QTY) can be different from Customer Order QTY if you have some finished products in stock (for ex., from previous orders).

Internal Order can be split into several Production Orders.

What is "Production Order"?

Production Order –  is a quantity of intermediate products under certain Activity Unit.

Production Order QTY can be different from Internal Order QTY if you have intermediate products in stock.

What is "Activity Unit"?

Activity Unit –  is a virtual unit that allows to allocate resources (machines and work stations) to a certain production activity.

The activity unit structure can be different from your department structure.
A company can also have a single activity unit.
For example, see the picture. A company has 3 activity units according to production activities of their factory: CNC Milling, Painting, and Assembling and Packing. 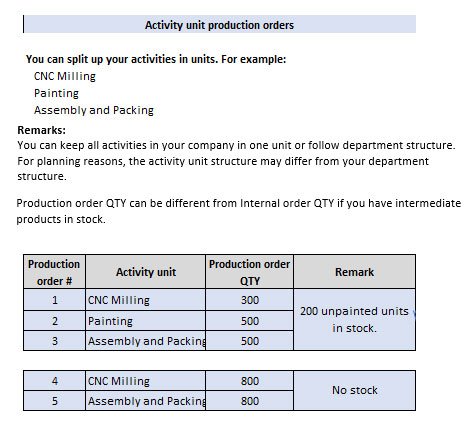 Job – is a piece of production activity (activity unit), needed for parts of a product to pass through certain manufacturing step/stage.

Job QTY can be different from Production Order QTY if the activity unit has semi-completed parts in stock, or to adjust rejects.

Why adjust the quantity internal order in addition to a customer order?

You may choose to produce a different quantity from the customer order:

Why create different production orders from an internal order?

The activity units in your company (each with its own supervisor or manager) will be held accountable for timely delivery on their assignments. The split up of the internal order into different production orders lets you keep an overview of the progress of all the parts or process steps of the production.

Why split production orders to jobs?

You create a job for every time resource or work station activity. All jobs are scheduled individually, and their status and progress can be monitored in real time.
As you may have intermediate (semi-finished) parts in your factory, the production quantity for each job can be set individually.

Why use an activity unit setup different from the department setup?

Naturally, each production resource can only be assigned (and physically be placed) to a single department.
In the example of ABC, they have created 3 different departments:

The mould making process however can only be marked completed once the mould has been tested (mould test is a job) and after testing some parts of the mould may need rework (jobs will be created for each rework step).
When using the setup: “Department = Activity Unit” the production order for mould making cannot be completed by the Mould manufacturing department, as they have no injection moulding machine for testing. By including injection moulding machine(s) in the Mould making activity unit this problem is solved.

Tutorials You May Want to Watch

Available Only for Active Users of Monitor-Box System